Year 4 is the class of St. Catherine of Siena 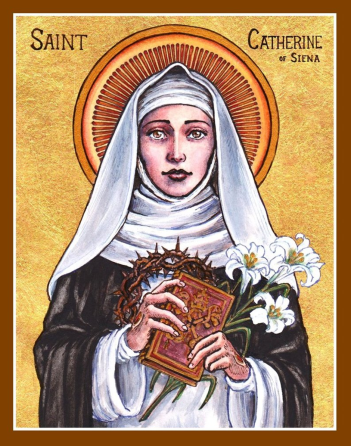 A Prayer for St. Catherine of Siena’s Intercession

as you meditated on the Passion of Jesus His Son.

Moved by His grace, you devoted your life to the poor and the sick,

as well as to the peace and unity of the Church.

Through your intercession, may we also come to know the love of Jesus,

bring His compassion to all, and work for the unity of His Church.

We ask this in Jesus' Name and for His sake.

God, You caused St. Catherine to shine with Divine love in the

contemplation of the Lord's Passion and in the service of Your Church.

By her help, grant that Your people, associated in the mystery of Christ,

may ever rejoice in the revelation of His glory.

Who was St. Catherine of Siena?

Catherine was the youngest of a very large family, she had twenty three brothers and sisters. At the age of six she had a vision in Church in which Jesus appeared to her and blessed her. She felt that Jesus wanted her to give her whole life to him. Catherine's parents wanted her to marry so she had her hair cut off and became a Sister instead, joined the Sisters of the Third Order of St. Dominic. She took care of the poor and the sick, nursing people no-one else wanted to care for and spent a lot of time in prayer.

Catherine made a special visit to Pope Gregory XI and told him that God wanted him to live in Rome not France. The Pope listened to her because she was very wise and did go back to Rome. Catherine became very sick and three months later died in 1380 aged thirty three.In 1975 Catherine, who had never gone to school (she only learnt to read and write shortly before she died), was declared a Doctor of the Church. This is a title for someone who was outstanding in teaching and guiding the Church. St Catherine is the patron saint of nurses.